In the last newsletter, I theorized that if someone (the agent) is doing something for you (the principal), they may have an interest in making it as complex as possible for you to understand. The less you know about how things truly work, the more you need to trust whatever they say.

As a result, agents have an incentive to maximize what economists call asymmetric information: the difference in information between them and you.

But I think a better term for this may actually be asymmetric knowledge. Which, of course, begs the question: what is the difference between information and knowledge?

One way to think about this is by using a graph: 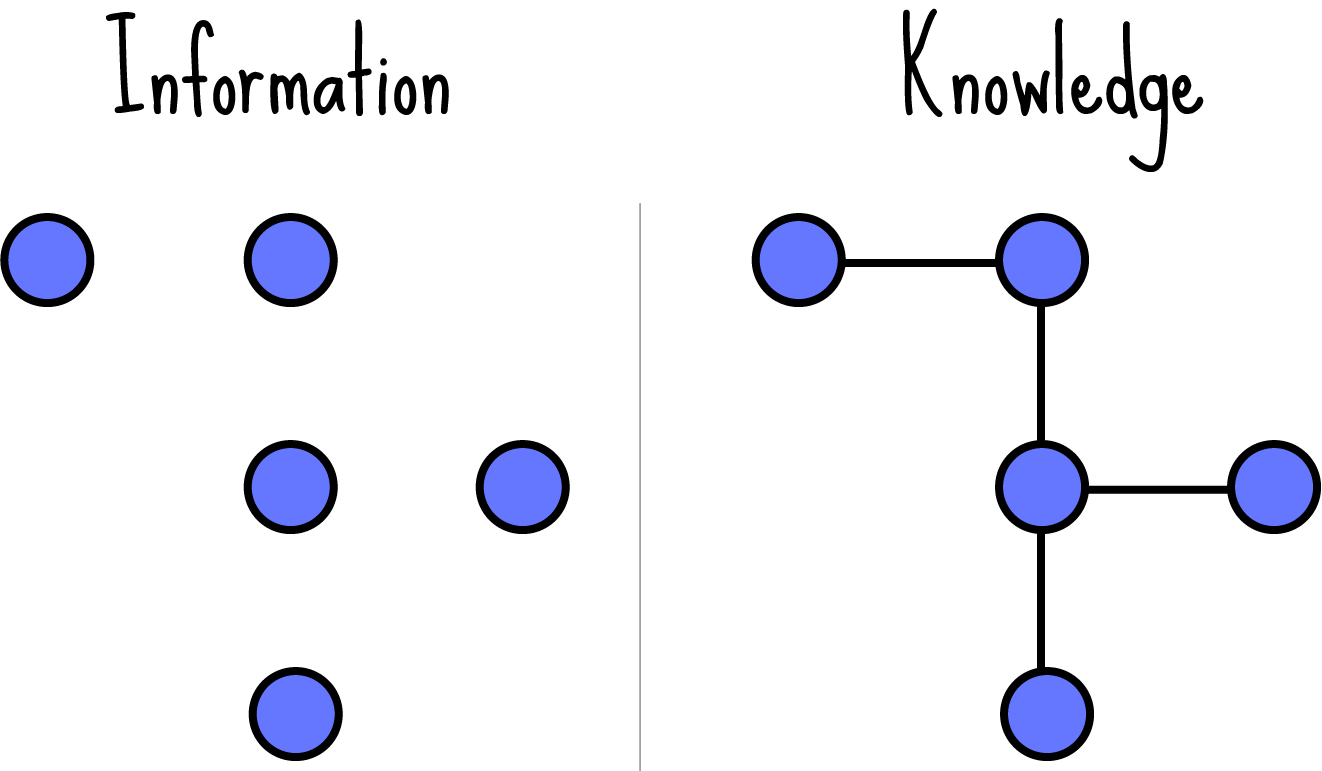 Generally speaking, information alone is not particularly useful. “The chair is dark brown” is, in isolation, a vacuous statement. It attaches to nothing, occupies no greater context, serves no greater purpose. It just is.

On the other hand, “the chair is dark brown because it was just painted, so don’t sit on it” - now that is useful!

Knowledge chains together otherwise disparate pieces of information into causal relationships. “If it’s dark brown, it’s wet. If it’s wet, it was just painted. If it was just painted, don’t sit on it. If you do sit on it, you’ll get paint on your pants.”

It’s precisely using models like these that we’re able to operate in the world and exercise some degree of control over our lives.

Now, there’s a problem with these explanatory models. If knowledge is the way we draw the lines between the dots, then we soon discover there are multiple ways of drawing the lines.

Two people can look at the same exact set of facts and come up with wildly different conclusions as to why we see those facts. They’re just connecting the dots differently! 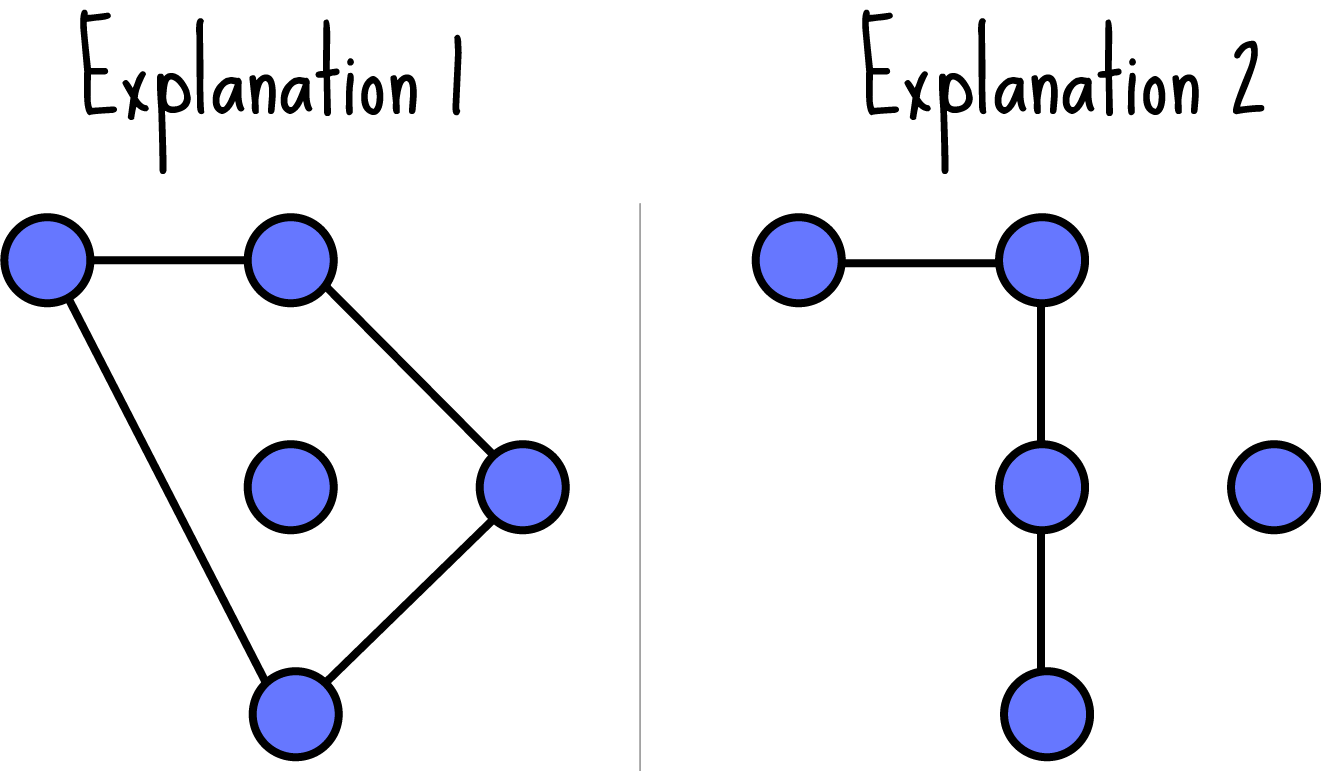 I’ve alluded to this problem in a previous newsletter. Namely, there are always multiple alternative explanations for any set of outcomes you see.

Imagine you’re a business trying to evaluate the results of some advertising. It may have coincided with an increase in revenue, but what does that show? Perhaps:

In The Secret of Our Success, Joseph Henrich uses a great term for this problem. He calls it causal opacity.

In the complex world we live in, it’s sometimes very difficult to determine what actually caused what. Things have multiple causes, things happen by pure coincidence, things are part of feedback loops, things can be backwards.

The sheer abundance of causal opacity in the world leads to a sort of terrifying realization, which is that we have a lot more flexibility in redrawing the lines than we think. Any particular explanation is just one way of drawing the lines.

For example, if your boss reprimands you for coming into work late, you may propose some alternative explanations for your behavior:

In every case, the goal is to suggest plausible, alternative explanations where you aren’t at fault, and delegitimize the ones where you are. When things go wrong, plausible deniability is about drawing the lines in such a way that they don’t go through you.

This of course can also work in reverse.

On the other hand, if the outcome is good, we may propose explanations which include us in the causal model. We want to draw the lines such that they go through us.

In other words, we may want to take credit for things we otherwise played little to no causal role in. Cherry-picking privileges certain explanations - namely the self-serving ones - at the expense of alternative theories which are equally plausible.

Like plausible deniability, cherry-picking is common in domains where there is a lot of causal opacity: politics, engineering, marketing, education … but who am I kidding, it is everywhere.

I know, I know, this paints a depressing picture about the state of - well, all of reality.

If there’s enough causal opacity, anyone who’s particularly creative and conniving can craft a self-serving explanation which is, unfortunately, plausible! That’s the whole point of causal opacity: many explanations are plausible.

So if you want to know how things actually work, and not just the self-serving explanations by clever rhetoricians, what can you do to identify the best explanations?

There is no silver bullet, but I like to keep a few of questions in mind:

One takeaway for me from all of this is that there is a lot more subjectivity in the explanations we see than we often realize. Explanations about how the world works aren’t ordained by some higher power, they are explained by people. People with interests and incentives, and people who are by their very nature subjective.

So the more we develop the skill of critically evaluating these explanations, the more we’ll approach a better understanding of how things actually work.