In the last newsletter, I said I would dive into some of the characteristics of complex systems such as: non-linearity, feedback loops, emergent order and chaotic behavior.

But! Before that, there’s actually one more big thing about complex systems which I conspicuously omitted. Complex systems can adapt[1].

First, what does it mean to adapt? Adaptation refers to the ability of a population or system to improve its chance of survival over time - that is, its “evolutionary fitness.” No individual part in the system is uniquely responsible for the system’s survival, but collectively, the system behaves in such a way to stay alive.

Whether it is a species or community or organism, what ultimately drives this system is self-preservation. It is robust and resilient in the face of external shocks. Loosely speaking, the system has a “will to live.”

For example, the human body is an adaptive system. Need energy? Go eat. Need to recover? Go rest. Need to cool off? Start sweating. The body - via homeostasis and allostasis - reacts to its changing environment in order to stay alive.

Similarly, a firm is an adaptive system. Firms are constantly reacting to changing business conditions in order to improve their bottom line - that is, their ability to survive. For the firm, dissolution is death.

In fact, self-preservation can be seen in many if not all forms of human organization. Communities, social circles, tribes, markets, religions and nations all fight to stay alive. 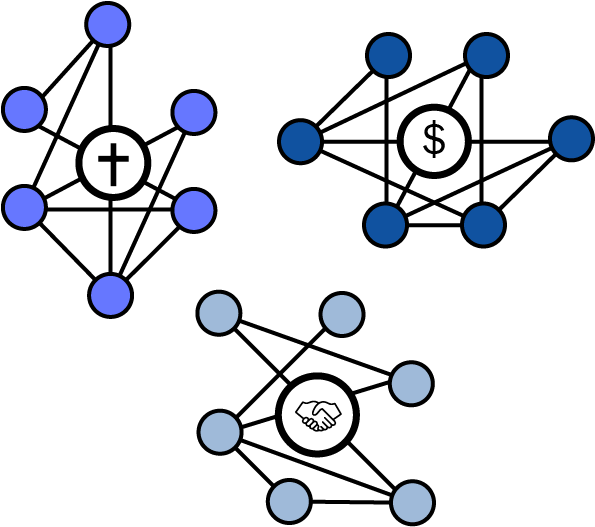 So what makes a complex adaptive system?

When the individuals who compose the system are adaptive themselves[2]. In other words, an adaptive system is born of adaptive components.

For example, employees at a company - in their own self-interest of receiving their salary - have a vested interest in ensuring that the firm continues to operate. The same cannot be said of the computers or the building or the electricity - none of these components are adaptive.

Being adaptive is a precondition for the defining feature of complex adaptive systems: the system and its components are co-dependent. The more the system depends on its parts - and the more the parts depend on the larger system - the more adaptive, cohesive and resilient the network becomes.

You can think of the human body: the parts rely on the whole for blood and energy, while the whole depends on the parts for specific, life-sustaining functionality. The same goes for a firm, family, community, and so on.

If a complex adaptive system careens after an external shock, or gets caught in a negative feedback loop, the agents in the system coordinate and cooperate to pull the system back on track. After all, should the system fail, so too do the parts. 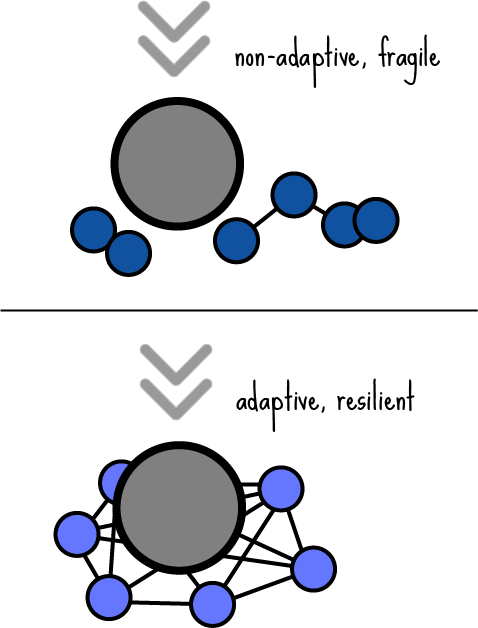 This is pretty neat. From nations to religions to local meetups, all of these systems seek self-preservation. And if they are to succeed, they need to foster co-dependence between the parts and the whole.

When co-dependence weakens, so too does the resilience of the system. If the system - often controlled by coordinating bodies - gives back too little to the parts, the parts will seek self-preservation elsewhere. And if the parts do not adequately give back to the system, the system ends up supporting dead weight.

The quality of a network then becomes very important for its viability. Plugging in additional parts to the system, whose fitness or survival is completely unrelated to that of the larger system - let’s call this “empire building” - reduces the resilience of the entire system. It becomes brittle and fragile. On the other hand, the more aligned the fitness functions (or “incentives”) between the parts and the whole, the more adaptive the system is.

Banding together as a system comes with advantages that only emerge at the system-level, such as “strength in numbers” and “economies of scale.” But if we want to keep that system as resilient and adaptive as the composing parts, we need to promote a co-dependence between part and whole.

Last time, I wrote about how complex systems feature properties of both orderly systems and chaotic systems. There seem to be phase transitions: order devolves into chaos, and chaos self-organizes into order.

I discovered recently that this transition has a pretty cool name: “the edge of chaos.” And here’s a related reading on the topic from the Sante Fe Institute, which specializes in the study of complex adaptive systems.

[1] Not all complex systems are adaptive. Consider a forest: highly networked, highly complex. But should one tree catch fire, the entire forest is soon entirely engulfed in flames - no more forest. Or consider a cloud: a highly interdependent, complex system. But should weather conditions change, the cloud quickly dissolves - no more cloud. Due to the nature of complex systems - namely how they spin out of and accelerate away from equilibrium - they often do not persist over time unless they include adaptation.

[2] Admittedly, this seems circular. Organizations are composed of people, who themselves are composed of cells, which are themselves composed of genes. Each system tries to keep the higher level alive as a vehicle for its own success. For living creatures, this circularity ends at the gene. What seems to compose each “level” is the fact that agents are self-replicating and homogeneous, creating redundancy in the system.