Happy New Year’s Eve! As a gift, here is an unintentionally, extra-long newsletter.

In psychology, the just-world phenomenon is the tendency for people to believe in a just and fair world - even if it is not. We want to believe that we - and others - are fairly and deservedly compensated for certain behavior. Should we behave well - for example, prudently, industriously or ethically - we deserve good outcomes. Should we behave poorly, we deserve bad outcomes.

If you sever the link between actions and consequences, suddenly there is no rational, “right” way to behave. Virtue - such as hard work or patience or beneficence - can be punished. Vice - like sloth or greed - can be rewarded. Decoupled from consequences, good or bad actions become meaningless. How should you behave if you can’t establish cause and effect?

The just-world mentality is therefore a product of our brains working as intended. It’s our pattern-making algorithm seeking cause and effect, identifying which behaviors deserve which outcomes. It’s our brains instinctively supplying a because - “this happened because…” - so that we can emulate productive behavior and avoid counterproductive behavior.

In fact, a lack of a just-world mentality is associated with higher degrees of psychopathy. This makes sense: if you don’t believe in a just world - a world where certain behavior merits certain consequences in a predictable and orderly way - then you have no “reasonable” way to behave. Hence, psychopathy.

This throws a wrench in our pattern-making machine. It’s where the just-world phenomenon becomes the just-world bias. Upon seeing people with successful outcomes - fame, wealth, happiness - we immediately assume that virtuous behavior got them there. And upon seeing people with unsuccessful outcomes - poverty, mental illness, poor health - we immediately impute a moral failing. Here, we find hero worship and victim blaming, which of course do not account for the inherent randomness - the good or bad luck - that inevitably plays a substantial role in success or failure.

As with all cognitive biases, there is a reason why we believe in the just-world phenomenon. We need to believe in a logical, coherent, cause-and-effect driven world in order to function. At the same time, our brains may look for cause-and-effect where none truly exists. As with all cognitive biases, simply being aware of the bias can help us understand its utility, as well as its limits.

Schadenfreude is the feeling of pleasure or joy upon seeing the failure or suffering of others. Perhaps this is most prevalent in sports: we actively want the other team to lose, and to suffer because of it. That gives us joy.

Schadenfreude is most often explained by our competitive nature. If someone else succeeds, that means there is “less of the pie” for us. There is a zero-sum mentality at play, where “you win” means “I lose.”

If this is the case, then it seems useful to reframe our interactions with others as “positive-sum”: that another’s success does not deny our own success. In a pie which is growing, there can be win-wins.

I want to argue, however, that it’s not only our competitive nature driving schadenfreude. It’s also the just-world phenomenon.

We want to believe that certain outcomes are fair - that the other team is “wrong” in some way, and therefore deserving of failure and suffering. We know our team better - we see their virtues - and we therefore believe that they are worthy of success. We need to see the world as fair.

This would also explain why we can even feel schadenfreude for people we are close to. If a friend or family member immediately achieves some measure of success - say wealth or fame or recognition - we want to believe that they deserved it. If they didn’t deserve it - even if they are close to us - this breaks our mental model of the world. We may instead want to see them fail.

Success must be deserved, otherwise we have no bearings for how to behave. For humans, fairness is a primal need.

All this is to say that schadenfreude is not some moral failing in character. Rather, it is our pattern-making algorithm working as intended. It is our brains fighting to believe in a fair, logical, coherent world - a world where suffering is indeed deserved.

Now for the finale.

Mudita, often considered an antonym of schadenfreude, is the feeling of vicarious joy for the success or happiness of others. You may have felt this with friends or family - often parents feel this with their children - that simple, unadulterated pleasure of seeing someone else truly happy.

Certainly, schadenfreude seems like the ugly, contemptible sibling of mudita, which is selfless and noble.

I’d argue however that mudita is just one side of the same coin: our pattern-making machine at work.

I imagine that it’s hard - though not impossible - to feel genuine happiness for someone who is undeserving. If someone cheats on a difficult exam and gets an A, can we easily feel happy for them? Or if they get a promotion simply because their boss resigned? If we do feel genuine happiness for others - be they children or friends or partners - we are quick to rationalize how they in fact “deserved” it.

Deserving, then, seems to play a critical role in how we rationalize good and bad outcomes. We can draw a matrix like this: 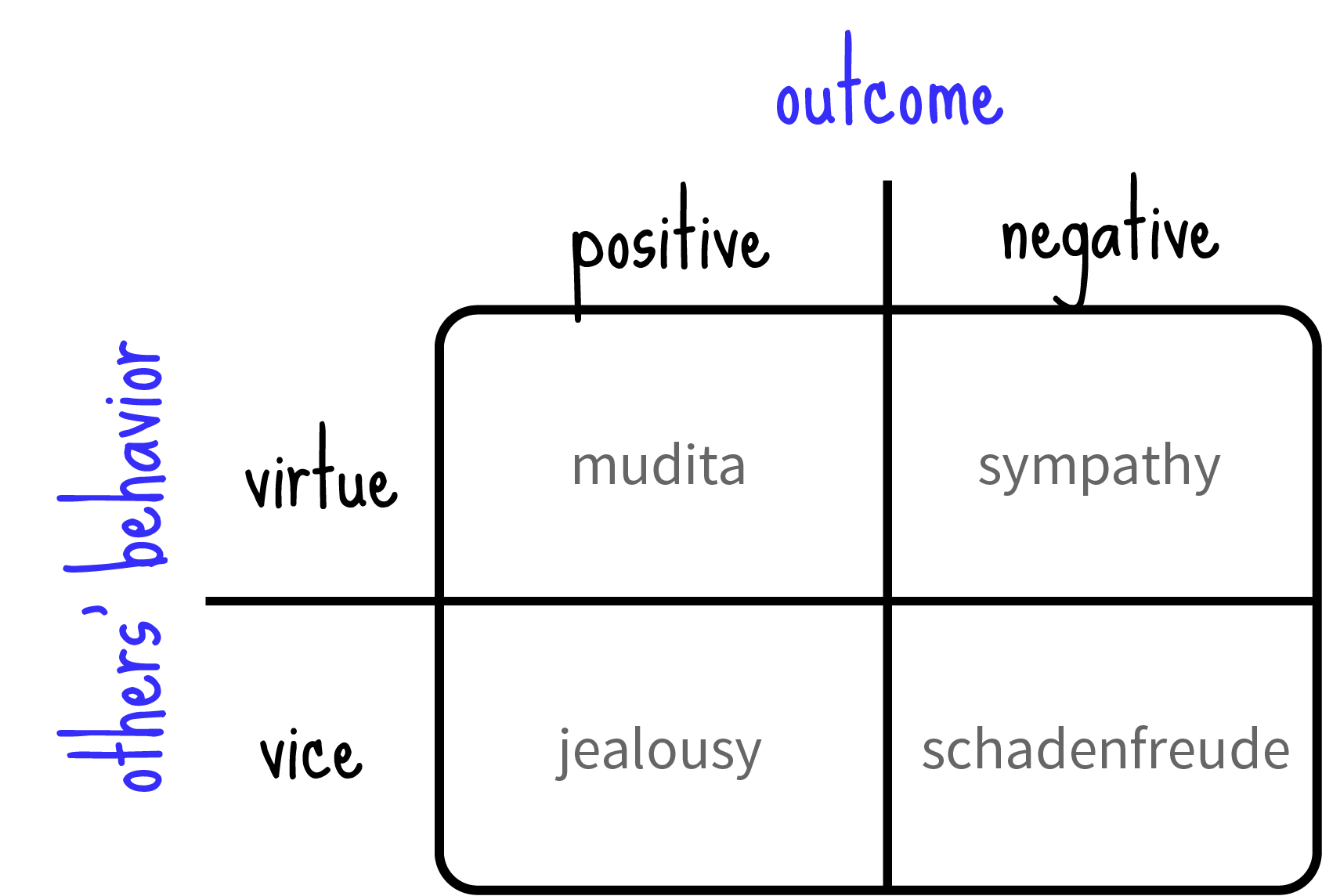 While we can all probably aspire to experience more mudita, I’m not sure how feasible it is. It doesn’t strike me as functional because it ignores our core human need to associate positive outcomes with good behavior.

Instead, I see mudita as an observational framework: you can look only at outcomes - suffering or happiness - and disassociate from their causes. Here, in observing the world - but not necessarily changing it - we can experience mudita.