The helpful hierarchy and kairos

This is an awesome little diagram that shows how to be helpful when you’re working on a team. 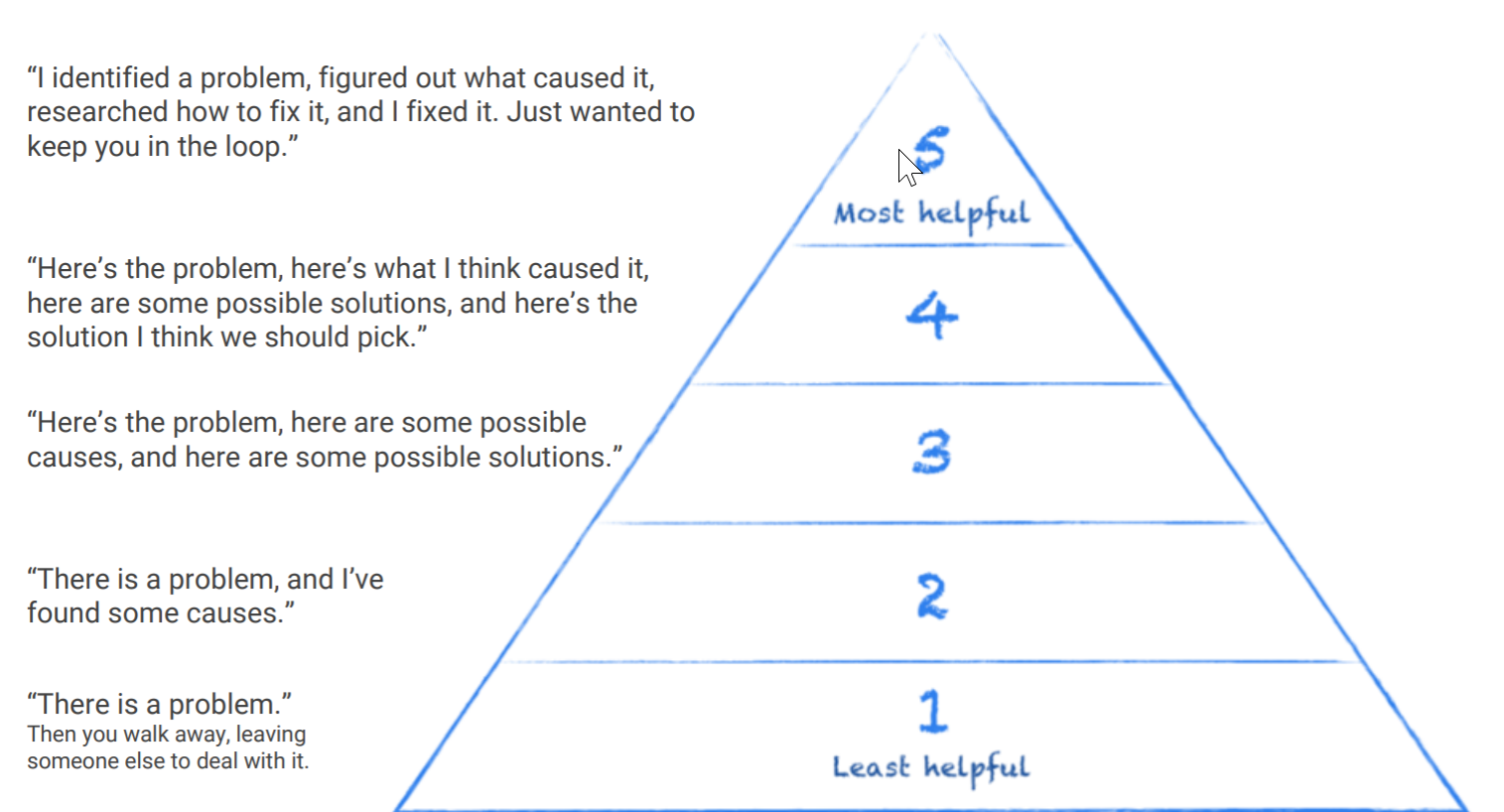 I have definitely been a Level 1 employee, and it is remarkably easy to stay there - after all, it looks like you’re being helpful. You’re sending emails, researching, asking questions and doing the actual work.

But what I wasn’t doing was the thing I knew my manager was going to ask for. Such as: I know my manager will ask me what the causes of the problem are, or to research potential solutions, or to talk to people who may have seen the issue before, or to implement the simplest solution and see what our results are. I know all this.

Instead when I emailed, “here’s the problem, what do you think we should do?” I was simply being lazy. I was passing the buck to my manager to figure out. I could have simply fixed the thing - or failed having at least tried something - and then let my manager know what happened. Helplessly emailing was an excuse to quit early.

While we only have one word in English for time, it really seems like we’re conflating two different notions of time which we all intuitively recognize.

There’s time in its quantitative, objective sense. This is the time ticking away on the clock, which we use for measuring things - it’s the same for you as it is for me. The Greeks called this chronos.

And then there’s time in its qualitative, subjective sense, which the Greeks called kairos.[1]

Unlike chronos, kairos is all about moments: the right moment, the perfect moment, the moment that is swelling with energy and meaning and opportunity. Kairos is when time speeds up or slows down. It’s that moment when you’re lying out under the night sky and can imagine that instant lasting forever, or when you finally reconnect with a friend you haven’t seen in ages, or when someone surprises you with an overwhelmingly selfless act of kindness. Kairos is that little, momentary gravitational well that sucks up all the time and space and meaning around it into something richly significant and pure - momentous, even.

Kairos and chronos work in completely opposite ways. While chronos is static and unchanging, kairos is dynamic and fleeting. It’s only when you are in the moment - when you are truly experiencing kairos - that you forget about the passing of time, chronos. It’s as though kairos propels you forward, while chronos holds you back. You could say that we live by kairos and die by chronos.

So what does this actually mean? Be it through travel or people or reading or sports, we seek kairos. We are trying to elevate ourselves from the monotony of life and the inexorable march of chronos. Through exploration, adventure, spontaneity, wonder, creativity & ingenuity, we find kairos.

+ here’s something i wrote

Logical commitment is no more than a mere curiosity, but I find it interesting regardless. It’s when someone convinces you so reasonably and logically that you actually have to change your behavior going forward - yesterday you were doing one thing and now today you were convinced to do something totally different. I find it bizarre how quick this can change.

Philosophers often behave like little children who scribble some marks on a piece of paper at random and then ask the grown-up ‘What’s that?’ – It happened like this: the grown-up had drawn pictures for the child several times and said: ‘this is a man’, ‘this is a house’, etc. And then the child makes some marks too and asks: what’s this then? - Ludwig Wittgenstein